What does the life of a scientist look like? I’ll give you some insights- taking myself as an example. You’ll find details on this blog, as well as in the form of videos on my vimeo and youtube channels. You can follow me on twitter @RenskeOnstein. 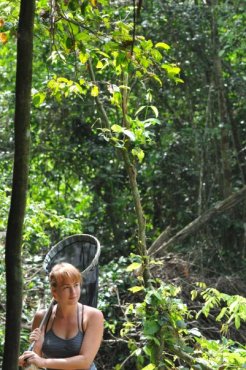 In 2004 I started my undergraduate studies in Biology at Wageningen University (the Netherlands). During my MSc thesis I studied the (co-) evolutionary relationships between a butterfly genus and a plant genus in tropical Africa, for which I explored the Ghanaian National Parks. Not finished exploring, during the last months of my studies I worked for the National Science Quiz, a yearly television show in the Netherlands. This allowed me to express my passion for (science-) communication and develop more artistic skills. Nevertheless, I decided that my passion to better understand the evolutionary processes that are responsible for the enormous diversity of organisms on Earth was more pronounced, and I started my PhD in 2011 at the University of Zurich (Switzerland) on evolutionary ‘radiations’ in flowering plants. After finishing my PhD in 2015 I did some postdoc-hopping in Paris (Université Paris-Sud, France) and Amsterdam (University of Amsterdam, The Netherlands), and have started a junior research group position on ‘evolution and adaptation‘ at the German Centre for Integrative Biodiversity Research (iDiv, Germany) in June 2018.

On this blog I will try to communicate ideas, explain (evolutionary) concepts and theories that have existed since Darwin’s time, give examples of thoughts and actions in the life of a scientist and show some of the rich and extraordinary species diversity I have encountered during several journeys to other ends of the world. However, investigating processes that MAY have happened in the past and MAY be responsible for the diversity we see today, is scientifically very challenging and also needs a lot of inspiration, creativity and a bit of story-telling…