In the beginning of March 2020, just before COVID-19 took over Europe, we organised a Legume trait meeting at iDiv (Leipzig, Germany) which was also the PhD kick-off meeting for the PhD project of Francisco Velásquez Puentes. For his PhD, he will study the role of functional traits during biome transitions in Neotropical legumes, as well as diversification mechanisms in relation to drought adaptations and dispersal – from macro- as well microevolutionary (population genomic) points of view.

Our guests – all legume/trait/biome experts – travelled from the UK – University of Exeter (Toby Pennington), University of Edinburgh (Kyle Dexter, Flávia Pezzini)  – and Switzerland – University of Zurich (Colin Hughes, Erik Koenen, Jens Ringelberg, Elin Ruetimann). The 3 day meeting was insightful and initiated new ideas and initiatives which will hopefully substantialize in the coming years. 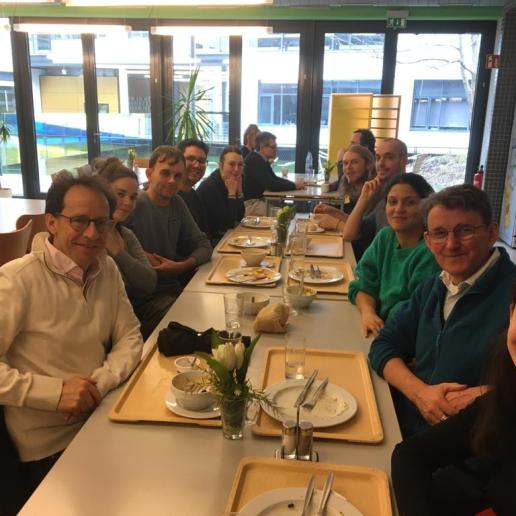 Lunch during the legume trait meeting

Data for the article can be downloaded here

Colourful fruits may be the reason why primates can distinguish between shades of red, green and blue

Leipzig/Amsterdam. The evolution of colour vision might be closely linked to the availability of food. Researchers from the German Centre for Integrative Biodiversity Research (iDiv), Leipzig University (UL), and the University of Amsterdam (UvA) found that colour vision in African primate species, which is similar to that of humans, is related to the spatial distribution of palm fruit colours. The results of their study have been published in Proceedings of the Royal Society B. They shed new light on the evolution of primates.

In our retina, three kinds of receptors are responsible for the perception of basic colours: red, green and blue. The same holds true for many primate species – in contrast to all other mammals. For nocturnal species, the ability to distinguish different colours would not provide a significant advantage. It is therefore highly probable that so-called trichromatic vision developed in diurnal primates. In addition to greens and blues, they can also distinguish shades of red, making it easier to detect coloured fruit. This could provide a competitive advantage over other fruit-eating animals that cannot distinguish red from green. While this idea had been tested experimentally in a few species, it remained largely unexplored on a larger scale.

A team of researchers from iDiv, UL and UvA has now shown that trichromatic vision in primates is strongly linked to the availability of conspicuous, red palm fruits. Their research involved analysing data on the colour vision and distribution of more than 400 primate species as well as fruit colour data for over 1700 palm species. The result was clear: trichromatic vision in primates is most common in African countries with a high proportion of palm species with very colourful, conspicuous fruits.

This relationship is a win-win situation, benefiting both primates and palms: while primates rely on palm fruits as their primary food source, they are also important seed dispersers in tropical forests, particularly for large fruits. The research shows that the number of diurnal, fruit-eating primates in Africa increases with the proportion of conspicuous palm fruits, with a peak in subtropical regions. The results suggest that the effects of palm fruits on primates are strongest in the transition zones of arid to subtropical regions, where competition for food is also high. For the African primates, the ability to see several colours is thus an advantage when foraging. Palms, in turn, evolved colourful fruits that could be easily spotted by the primates, thus helping to disperse their seed.

The researchers did not only analyse data from the African continent, but also from Asia and the Americas. “Interestingly, in the Americas and Asia some primate species have trichromatic vision, whereas others do not. Here, we did not identify a relationship between colour vision and the proportion of conspicuous palm fruits,” said first author Dr Renske Onstein from iDiv and UL. Furthermore, most primates in the Americas prefer palm fruits with non-conspicuous colours. By contrast, many trichromatic primates in Asia have no interest whatsoever in a fruit’s colour – they enjoy feeding on large amounts of fruit in general.

“In Asia and the Americas, birds and bats could play a more important role as seed dispersers than primates,” explained Dr Daniel Kissling from UvA, senior author of the study. “In contrast, there are relatively few frugivorous birds on the African continent, so palm species may rely more on primates as seed dispersers than other fruit-eating animals.” The analyses show that palm species in Africa are dominated by those with conspicuous fruits, whereas the fruits of American species tend to be more inconspicuous.

Many primate species are now threatened with extinction due to rapid habitat loss and global changes. This may have cascading effects, especially when some plant species rely on primates as their primary seed dispersers. Thus, conservation efforts should also take plant-animal interactions and fruit-colour diversity into account as this is crucial for maintaining tropical biodiversity. This video was made in collaboration with TRICKLABOR for the amazing animations. I also obtained an Outreach grant from the European Society of Evolutionary Biology (ESEB) and a grant from iDiv’s Female Scientist Career Fund to make this film project happen. 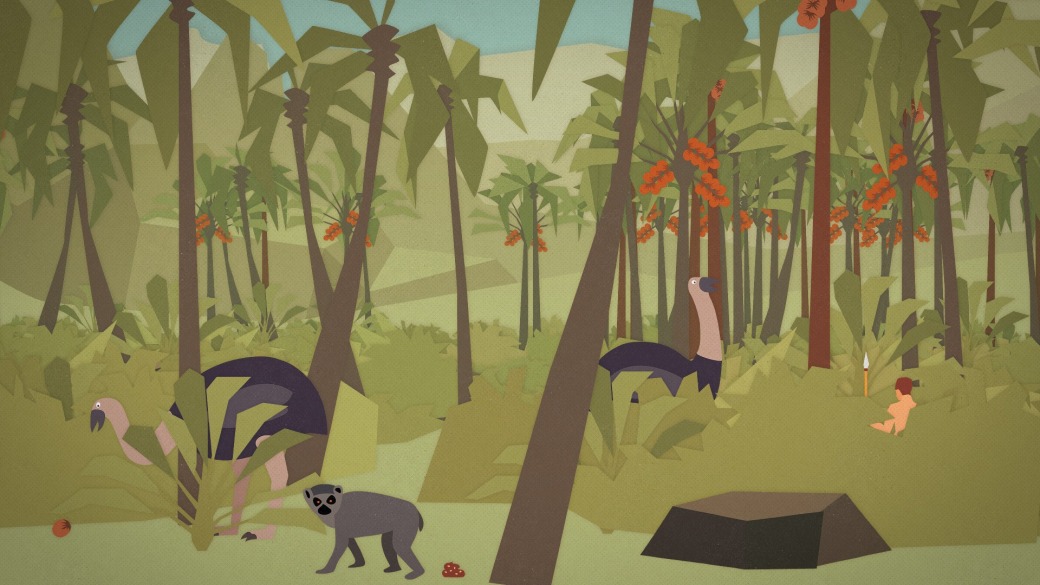 As part of the “Tansley Medal” competition of the journal New Phytologist, I was asked to write a short (max 2500 words) Tansley Insight article. I applied for the competition a year ago, and was informed last April that I was short-listed. This pushed me to finally write this review, of which the topic dates from my PhD times.

I did my PhD at the University of Zurich as part of the ‘Cenozoic Angiosperm Radiation’ (CAR) project led by Prof. Peter Linder (who recently retired). The CAR team included several people, among them Colin Hughes, Yaowu Xing, Yanis Bouchenak-Khelladi and Erik Koenen. We would have Tuesday afternoon beers for several years to discuss ideas and projects. The main aim was to understand angiosperm radiations from phylogenies, fossils and functional traits, and we managed to tackle this question in several angiosperm clades, such as Fagales, Rhamnaceae, Proteaceae and Ericaceae. The emergent patterns across clades showed that radiations, or evolutionary diversification, is often the result of the intricate interaction between traits and environments. 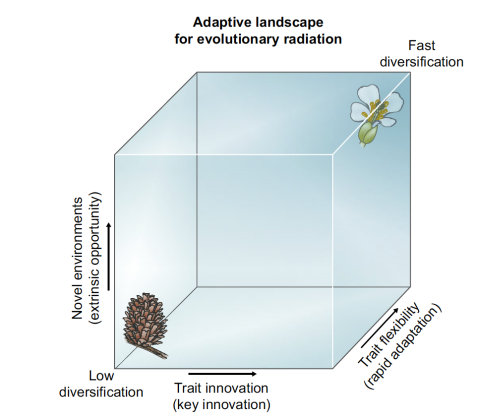 What remained an unanswered question, to me at least, was why angiosperms seem to have managed to radiate much more than other plant clades, such as gymnosperms, and also why not all angiosperm clades do equally well (in terms of their diversification rate). This question is not new, it was already proposed by Darwin (his second ‘abominable mystery’) and reviewed by Crepet and Niklas in 2009.

What I propose in my review, is that angiosperms (compared with gymnosperms) and species-rich angiosperm lineages (compared with species-poor lineages) have had (1) many trait innovations, (2) many ecological opportunities that emerged during Cenozoic global changes and (3) ‘trait flexibility’ to explore the functional space of novel traits, allowing for rapid adaptation to novel environments. These three ‘ingredients’ combined could lead to increased diversification rates. I quantified the support for this idea by performing a systematic review across the literature for trait-dependent diversification rates (key innovations) and trait transition rates (trait flexibility). Indeed, it seems that although no trait consistently leads to radiation across angiosperms, certain lineages may be predisposed to evolve the right traits in the right place at the right time, suggesting trait flexibility. This may have a genetic basis, and may explain why angiosperms have risen to dominance in most terrestrial ecosystems during the Cenozoic (i.e., the last 66 million years).

Functional traits are characteristics of individuals, populations and species that determine their fitness, via their impacts on growth, survival and reproduction. Examples are leaf size, leaf thickness, fruit size, wood density…. Traits are great proxies for the ecology of species, and used extensively in macroecological and macroevolutionary research. PalmTraits 1.0 provides species-level trait data for all ca. 2500 palm (Arecaceae) species worldwide. The database is available from Dryad. The article in which we present the data was published in Scientific Data.

PalmTraits 1.0, Figure from the publication in the journal Scientific Data

What else did we (I and my collaborators) do with these data? For example, using average fruit size of palm species, we asked questions such as: Do large fruits co-occur with large-bodied animals that disperse these fruits? And: Does fruit size influence speciation rates via the interaction between fruits and fruit-eating and seed-dispersing animals? What happened to palms with large, ‘megafaunal’ fruits since the Quaternary extinctions of large-bodied animals?

Answers to these questions can be found in these publications:

However, the data can be used to answer many more questions, related to the ecology and evolution of palms. Species differ not only in their fruit sizes, but also in, for example, fruit colours, leaf structures and sizes, the presence or absence of spines, growth forms, plant height. In combination with distribution data and a phylogeny, we can now answer questions such as: when did these traits evolve? Where do species with these traits occur? Where do we find the most colourful fruits, and why? Where do species occur that have spines? Etcetera…

250 years ago (almost) Alexander von Humboldt was born, and became the “father of biogeography”. Journal of Biogeography decided to celebrate his birthday by publishing a ‘special issue‘ on Humboldt-related research, ranging from integrating geo- and biodiversity, to studying elevational and latitudinal diversity gradients and the impact of tectonism on biodiversity.

Portrait of Alexander von Humboldt by Joseph Karl Stieler, painted in 1843, and shows Humboldt with a copy of his major work, “Kosmos”, and is owned by the Prussian Palaces and Gardens Foundation Berlin‐Brandenburg.

I contributed to three studies that were published in this special issue:

The second one was led by Suzette Flantua and introduces one of the ideas that emerged during her PhD at the University of Amsterdam, where we met and discussed this idea extensively over coffee: that some of the extraordinary diversity in paramós (and mountains more generally) may have resulted from a process she named ‘flickering connectivity’. It’s the balance between connectivity (of populations) and disconnection over time that may drive speciation. In this publication we quantified this connectivity through the Pleistocene in the northern Andes, by making use of a pollen-core and detailed temperature reconstructions. To illustrate these ideas, one of the authors made this amazing video. Read more in the press-release: (in English or Dutch) and publication: Flantua, SGA, O’Dea, A, Onstein, RE, Giraldo, C, Hooghiemstra, H. The flickering connectivity system of the north Andean páramos. J Biogeogr. 2019; 46: 1808– 1825. https://doi.org/10.1111/jbi.13607.

The third publication was led by Oskar Hagen, who is currently doing his PhD at the ETH in Zurich, Switserland (supervisor: Loïc Pellissier). He tries to understand how geological and biological processes interact in the generation of biodiversity (especially in mountains) – fitting very well in the Humboldt spirit. This publication addresses the origin of the Northern hemisphere mountain and Arctic floras, which have lots of lineages in common. Where did these lineages originate, and when? Where and when did cold ‘niches’ first emerge? To address these questions, we reconstructed cold niches throughout the Cenozoic by combining paleoclimate and paleoelevations, and combined these with species distribution data for cold-adapted taxa. Read more about it in the publication: Hagen, O, Vaterlaus, L, Albouy, C, et al. Mountain building, climate cooling and the richness of cold‐adapted plants in the Northern Hemisphere. J Biogeogr. 2019; 46: 1792– 1807. https://doi.org/10.1111/jbi.13653.

Onstein is ON
Blog at WordPress.com.